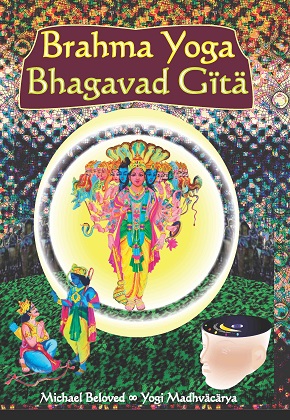 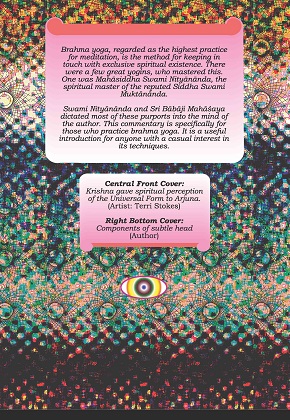 Email:  This email address is being protected from spambots. You need JavaScript enabled to view it.
Forum:  inSelf Yoga

This precise and very revealing translation and commentary, exposes the brahma yoga techniques hidden in the teachings Lord Krishna gave to Arjuna. This publication was inspired by Mahasiddha Swami Nityananda, who uses a causal body and who imparted this information into the mind of the writer by mystic transfer.

Brahma yoga techniques are secretive but in contrast, Lord Krishna divulged the process openly to Arjuna. This volume reveals this. It may free a reader from ineffective processes. For practicing yogis, it would confirm valid mystic methods and show new approaches to self realization and the curbing of the human psyche.

Brahma yoga, regarded as the highest practice for meditation, is the method for keeping in touch with exclusive spiritual existence. There were a few great yogins, who mastered it. One was Mahāsiddha Swami Nityānānda, the spiritual master of the reputed Siddha Swami Muktānānda.

Swami Nityānānda allowed me to serve as his publisher to give this commentary on Bhagavad Gītā which reveals the details explained by Lord Krishna. The complete course of  brahma yoga is revealed in the Gītā, and now Nityānānda shows how to use the information in a practical way.

Brahma Yoga is the most advanced meditation practice. It is not well known but Sri Krishna did touch on it in the Bhagavad Gita. If you read this it will give you some idea of how you can inch your way into the practice. This will greatly increase your admiration of Krishna.

Know your self through yourSelf by cpalacious (Amazon customer review):

This work is monumental! It is a revelation into the intricacies of the human psyche and into the mechanisms that keep all humans entrapped in this "mortal coil". Anyone interested in mastering their psychology should really look into this book. Furthermore, you should know that this is not the type of literature that is read once and then left in a bookshelf gathering dust. It is meant to be consulted time and time again as one advances in the spiritual path of yoga (or in any other spiritual path). The information found here is very humbling since one realizes that material existence is a colossus that has to be decapitated on a personal level. But once you realize what you are up against and decide to do something about it, divine grace will assist you along your way. So I suggest you get this book and start getting to know yourself through your Self!

Michael Beloved's rendering of this Bhagavad-Gita in the ultimate and most advanced context of Brahma Yoga is nothing short of amazing. The ancient science of Brahma Yoga is the highest practice in meditation and provides a definitive roadmap for reaching the spiritual existence. This commentary will give you an in-depth walk-through of all aspects of Brahma Yoga in relation to Krishna's teachings to Arjuna.

As I read this book, I continually wondered at the sheer psychological depth of the reading. The author's yogically-achieved grasp of human psychology is very evident.

Most of the book is written by Michael Beloved but clairvoyantly inspired by Swami Nityananda, an advanced yogi spirit who once inhabited this planet. I'll provide a few of the many key points for those who might be considering this book. In Brahma Yoga, one learns to develop dislike for both favorable and unfavorable circumstances. Pursuit of happiness is only beneficial if that happiness springs from one's indifference to material circumstances. Brahma Yoga Bhagavad Gita reveals how we can use this opportunity to "inquire into birth and death" as opposed to the normal pursuit of pleasure, expansion of vices, and development of science for the purpose of waging war and dominating others.

Furthermore, this book dissects the subtle organs of the body in the same manner as one would dissect a physical body. You will understand your inner workings, motivations, influences, energies, and more after reading this book. He traces the source of everything, not just on this physical level, but also on the invisible subtle and spiritual levels that can be accessed in varying manners according to your prevailing mode of depression, impulsion or clarity.

At one point he explains (through inspiration from Babaji Mahasaya) how the memory powers the intellect and thereby bothers student yogis. The key, he says, is to keep the intellect from supplying the memory with power to operate. Then one can achieve a blank state of mind and work to practice samadhi.

He banishes the idea of using idols and material objects for achieving success in the pursuit of liberation. These physical objects will not help one to gain mystic perception in the long run.

This 500+ page treatise on Brahma Yoga, on human, subtle and spiritual psychology, confirms the amazing completeness of the Bhagavad-Gita and lays the blueprint for any individual to master their inner psychology while escaping the whims of material nature. One's lack of knowledge and desire to perceive the truth should be one's main impetus to read this book and others like it. This will clear up your intellectual and mental darkness which is everpresent in the background and sometimes even in the forefront. So complete is this work that it's hard to find fault with anything, other than the occasional editing error.

A very interesting approach to the Bhagavad-gita.

A Book Well Worth the Reading by Neil W. Crenshaw (Amazon customer review):

This book should not be taken lightly by the serious practitioner of Brahma yoga or any other type of yoga as far as that goes. Brahama Yoga Bhagavad Gita is a detailed interpretation of the Bhagavad Gita as seen through the eyes of Yogi Madhvacarya (Michael Beloved) explained by The Master, Siddha Swami Nityananda.

The reader is taken through the Bhagavad Gita, step by step, with each verse interpreted with Brahama Yoga style transcription. The author explains in detail the meaning of Brahma yoga and how it relates to energy of the psyche.

What I like most about this book is the way the author translates the passages. Each and every passage of the Gita has the original Sanskrit writing followed by the pronunciation and the literal tanslation, word-for-word. This is an amazing feat in itself but the author goes on to add the English interpretation to that literal translation. Not only that but he also includes a commentary guided through him by his guru, Siddha Swami Nityananda. Although Nityananda died in 1961 Yogi Madhvacarya (Michael Beloved) received the psychic direction to write the commentary.

As far as I'm concerned, this is a very powerful book lending itself as a masterpiece in the world of yoga. As I read the verses I compared them to the The Bhagavad-Gita as translated by Barbara Stoler Miller. Michael Beloved's and Miller's translation of the Gita, although somewhat different in composition, are refreshingly similar in interpretation. I also compared this book, Brahma Yoga Bhagavad Gita, to Michael Beloved's other book, Kriya Yoga Bhagavad Gita, and found that although the interpretations are the same the commentaries are quite different. This might seem contradictory on the surface but the differences compound the understanding of the conflict that was going on inside the warrior Arjuna.